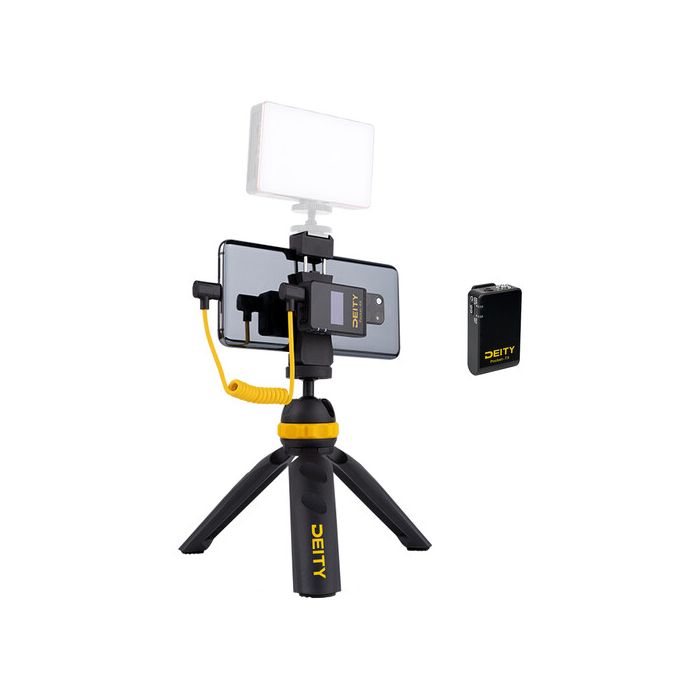 The versatile, black Deity Pocket Wireless Mobile Kit adds a phone holder and desktop tripod to this ultracompact true-wireless digital microphone system designed to provide high-quality, hands-free audio for applications including video creation, conferencing, livestreaming, and mobile journalism. The system can record audio to devices with USB Type-C or 3.5mm connectors, allowing it to work with a wide range of cameras, phones, recorders, and computers to deliver dependable wireless transmission that even inexperienced users can easily operate.

Do-it-yourself videographers working alone or with a single on-camera personality will find the Pocket Wireless makes set up simple, so you can focus on the rest of the action. The first part of the system is comprised of a miniature clip-on transmitter with a built-in omnidirectional microphone. Simply clip the transmitter to your subject's collar or lapel for quick run-and-gun shoots, or use the included lavalier mic for a more discreet look. The second part of the system is the ultracompact receiver, which attaches to your phone or camera and can receive wireless audio from the transmitter at a range of up to 213 feet.

The receiver connects to the USB Type-C port on your smartphone or tablet with the included cable, providing a digital connection for recording or streaming. The included smartphone holder and tripod provide a fast and easy way to set your phone up on a surface or tabletop for videos and conferences. For camera use, the receiver's clip doubles as a shoe mount, while the included USB to TRRS cable automatically adapts to work with any camera, camcorder, or recorder with a 3.5mm input jack.

The system arrives pre-paired at the factory and ready to go, while pair buttons allow you to sync with other Deity Connect components. Instead of commonly used 4mW Bluetooth 5.0 chips, the Deity Pocket Wireless utilizes a proprietary 25mW protocol for digital transmission—ensuring reliable signal strength, even when talent blocks the transmitter’s line of sight to the receiver. The transmitter and receiver both feature built-in rechargeable batteries that will run for up to 5 hours and can be completely recharged in 1 hour and 15 minutes. The receiver can recharge directly through the USB port while in use.

In addition to the previously mentioned components, the system also provides a USB Type-C to USB Type-A adapter cable, a USB Type-C firmware dongle, a fur windshield, and a rigid carrying case for storage and transport. A maximum of two Pocket Wireless systems can be used on set at the same time.