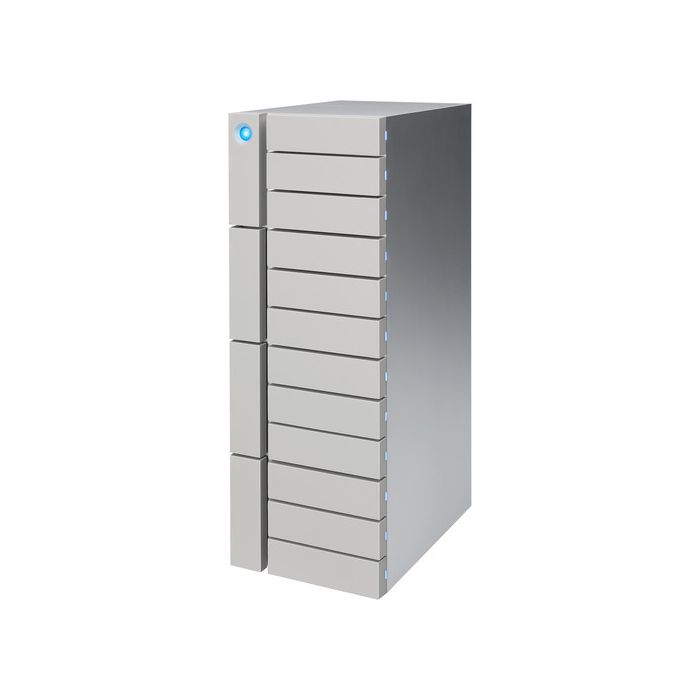 Designed to protect immense amounts of hi-res footage, along with the speed to edit 4/5/6K video, the 12big 120TB 12-Bay Thunderbolt 3 RAID Array from LaCie offers up to 120TB of storage split over twelve hot-swappable 10TB 3.5" hard drives, each of which utilizes one of the array's SATA drive bays. Each drive is equipped with a minimum cache of 64MB and a rotational speed of 7200 rpm, both of which help to ensure uninterrupted data transfers. The array itself is equipped with two 40 Gb/s Thunderbolt 3 ports and one 10 Gb/s USB 3.1 port, each of which use USB Type-C connectivity. For those whose system does not have a USB Type-C port, the 12big is compatible with USB 3.0 and USB 2.0 via an included USB Type-C to Type-A adapter cable.

The 12big 120TB 12-Bay Thunderbolt 3 RAID Array operates using a 100-240V 400W power supply at 50/60 Hz, can be used in 24x7 operating environments, and via daisy-chaining, supports storage expansion up to 576TB. The array also supports one 5K display or, via daisy-chaining, dual 4K displays. Its processing and display power will allow users to edit multiple streams of ProRes 422 HQ, ProRes 444 XQ, and uncompressed 10/12-bit HD video. Included with this RAID array is a power cable and a USB Type-C cable. Protection is provided by a limited 5-year warranty.

Fast I/O
For the 12big, LaCie harnessed the performance potential of the Thunderbolt 3 I/O and its fast data transfer rates. They added a hardware RAID controller and 7200 rpm drives, resulting in read speeds of up to 2,600 MB/s in RAID 0 and 2,400 MB/s in RAID 5

For Lightning-Fast Video Workflows
Thunderbolt 3 can slash time off nearly every task in a post-production workflow. Ingest hours of raw footage from a Blackmagic Cinema Camera into Adobe Premiere and edit multiple streams of PreRes 422 HQ, ProRes 444 XQ, and uncompressed 10-bit and 12-bit HD video. For big projects packed with high-def clips, thumbnail and preview rendering becomes much more responsive

For Your Smartest Workspace
With double the video bandwidth of its predecessor, Thunderbolt 3 lets you daisy-chain dual 4K displays or a single 5K display to the LaCie 12big. With two 4K displays, you can spread out your workspace by dedicating one display to your timeline and the other to previewing 4K footage. It's even possible to power a compatible laptop through the Thunderbolt 3 connection, which delivers up to 45W via port A or 15W via port B to compatible laptops.

Organize
Divide your storage into multiple volumes according to your workflow. Create one safe volume for backing up source media, another for ingesting transcoded clips and current projects, and another for archiving final footage

Daisy-Chain Expansion up to 576TB
Thunderbolt 3 lets you daisy-chain up to six devices to your computer using a single cable, allowing users to connect up to six LaCie 12big RAIDs for a total capacity of 576TB

Enterprise-Class Drives
Designed to operate 24x7 on 16-bay racks (instead of 8x5 operations for traditional hard drives), these HDDs are rated for up to 8,760 hours of operation per year