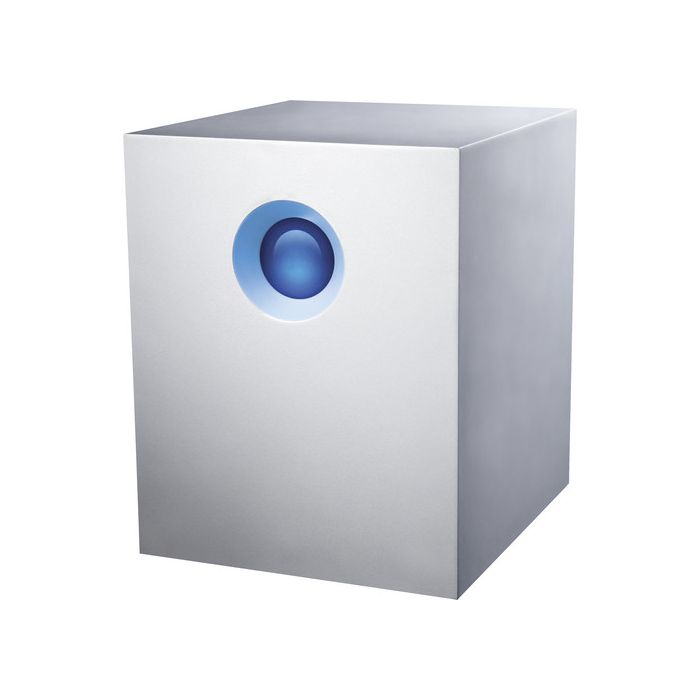 The 20TB 5big Thunderbolt 2 Series 5-Bay RAID from LaCie is a 5-bay storage enclosure designed for storing large files such as 4K video, RAW photos, and much more. With Thunderbolt 2 connectivity you can transfer data at speeds up to 1050 MB/s, in RAID 0, which enhance 4K workflows for real-time edits. The 5big supports a number of RAID configurations including RAID 0, 1, 5, 6, 10, and JBOD. While this storage enclosure comes preconfigured in HFS+ and RAID 5, it can easily be reconfigured to suit nearly any storage need. Additionally, with dual Thunderbolt 2 ports, the 5big supports daisy-chaining for up to 6 devices to a single computer including the ability to connect a 4K monitor with DisplayPort 1.2 compatibility.

Thunderbolt 2 Speeds
With Thunderbolt 2 technology the LaCie 5big Thunderbolt 2 is able to take full advantage of the absolute best speeds out of the hard disks. Add a hardware RAID controller and 7200 rpm disks and you benefit from sustained speeds of up to 1050 MB/s (in RAID 0) that enhance 4K workflows, reduce the time it takes to transfer large files, create backups, and more.

RAID for Speed with Security
The LaCie 5big offers RAID modes 0, 1, 5, 6, 10, and JBOD. Its hardware RAID controller delivers sustained performance, increased flexibility, and the ability to connect the product to another computer while keeping the RAID configuration. Preconfigured in HFS+ and RAID 5, it is truly plug and play for Mac users. And easily customize the RAID mode to suit your needs using the LaCie RAID Manager utility.

RAID modes 5 and 6 provide complete data protection against disk failure, while providing enhanced speed and capacity. This is perfect for when you want to use a single storage product for both editing and backup. Even in the case of disk failure, the LaCie 5big's hot-swappable disks mean zero data loss and little downtime.

You can utilize RAID 0 to maximize speed and capacity for current projects, and then move completed projects to archival storage quickly and efficiently. Or, choose JBOD, which allows you to see and use each disk independently. With five working days a week, you can assign each disk to a daily backup. It's even possible to set up multiple RAID volumes.

Thunderbolt 2 also continues to support daisy chaining up to six devices to a computer via a single cable (included in the box). For example, you could connect a total of 36 LaCie 5bigs via the six Thunderbolt 2 ports on a single Mac Pro, enabling more than 1PB (1080TB) and more than 3000 MB/s of bandwidth. Thunderbolt 2 even uses the same cables and connectors as first-generation Thunderbolt.

The ultra-quiet Noctua NF-P12 fan pulls heat away from the internal components while producing less noise. It's thermoregulated, so it also controls its speed according to ambient temperature. As a result, the fan works more efficiently while prolonging the product's lifespan. And for whisper-quiet operation, the LaCie 5big's heat exhausts direct noise away from the user.

Power Saving Mode
The front button gives you a convenient way to turn off the product or put it into Power-Saving Mode. A short press spins down the disks, reducing power consumption, without interrupting a Thunderbolt daisy chain. A long press powers down the product completely.