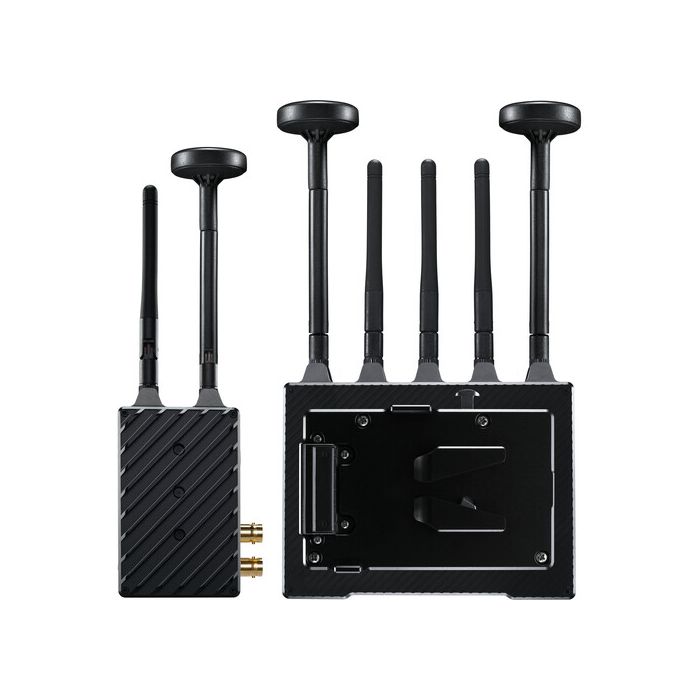 Transmit and receive lossless 4K video from up to 5000' line of sight with the Bolt 4K LT MAX 3G-SDI Transmitter & Bolt 4K MAX 12G-SDI Receiver Deluxe Kit from Teradek. The kit includes a wireless Bolt LT MAX 4K transmitter, a Bolt 4K MAX 12G-SDI receiver with a V-mount battery plate, and an Antenna Array for Bolt 4K that supports 4.9-7.3 GHz frequencies and extends your signal up to 5000'. The units feature bright OLED displays and can wirelessly send and receive up to 4K30 video with 10-bit 4:2:2 HDR support.

This specially designed hybrid kit allows you to upscale from 1080p and output 4K video via 12G-SDI with the Bolt 4K receiver rather than just 3G-SDI of the LT receiver. It also allows for a lighter load with a smaller transmitter and adds compatibility with the included long-range H+V antenna. All Bolt transmitters and receivers are cross compatible.

Transmit lossless HD video up to 5000' with the Bolt 4K LT MAX 3G-SDI/HDMI Wireless Transmitter from Teradek. The ultra-lightweight transmitter can input up to 4K30 video over HDMI and 1080p60 over 3G-SDI with 10-bit 4:2:2 HDR support. It transmits visually lossless video to any Bolt 4K series receiver with zero delay. The transmitter unit provides a powerful signal that can travel up to 5000' line of sight using the optional Bolt 4K panel antenna, and up to 3000' with its two included antennas. It also features a bright OLED display and a 3G-SDI loop output that supports video up to 1080p30 resolution.

The transmitter supports transmission of up to 4K30 video to up to six receivers in the same location, and it can also transmit to an unlimited number of receivers in broadcast mode. It also features improved metadata, range, and compatibility over its predecessors. Other features include HDMI/SDI signal cross-conversion; HDR workflows that support HDR-10, PQ, and HLG standards; LUT control on outputs; and extended metadata, timecode, and start/stop trigger transmission over wireless. Built-in AES-256 encryption and RSA 1024 key pairing protects your video from prying eyes, while noise rejection keeps your video clean no matter how many devices are using the wireless spectrum.

The Bolt 4K series units are all cross-compatible, so you can transmit to different Bolt 4K series receiver models. The transmitter also supports an iOS or Android app that easily connects via Bluetooth, which provides a spectrum analyzer, channel selection tools, and remote configuration. There are 1/4"-20 and M3 mounting threads to mount your transmitter on a variety of cameras, cages, or rigs.

Use the Bolt 4K MAX 12G-SDI/HDMI Wireless Receiver from Teradek with a V-mount plate to receive visually lossless 4K60 video signals from any Bolt 4K series transmitter with less than 1 ms of latency and send them out two 12G-SDI outputs or one HDMI output. The receiver unit can be secured to a camera or other SDI/HDMI video source via built-in 1/4"-20 or 3/8"-16 threaded holes. The five included antennas provide a powerful signal that can receive from up to a 3000' line of sight.

The receiver supports cross conversion from HDMI input to SDI loop output. It also supports HDR workflows, 10-bit 4:22 via 12G-SDI, and 8-bit 4:4:4 via HDMI. Its bright LED screen shows current settings and frequencies, and the transmitter can also connect with the Bolt app for iOS via Bluetooth for configuration.

Power can be provided using the integrated 2-pin connector with the included AC adapter or with a V-mount battery. A Bolt 4K transmitter supports up to six receivers, and it can operate up to six transmitters with receivers in the same area with Wi-Fi or 5 GHz appliances with the help of the noise rejection feature. It also features built-in AES-256 encryption with RSA-1024 key exchange to protect your video from prying eyes.

The Teradek Antenna Array for Bolt 4K 4.9-7.3 GHz allows the Bolt 4K to achieve a very strong and uninterrupted directional signal up to 5000'. It offers a more resilient wireless transmission, especially in challenging RF conditions, by focusing the signal and reducing interference.

The Array features a dedicated external omnidirectional antenna for increased reception when the signal is outside the directional cone of the panel array. As a result, you may achieve a boost in the reception range based on the maximum range of the connected Bolt 4K.