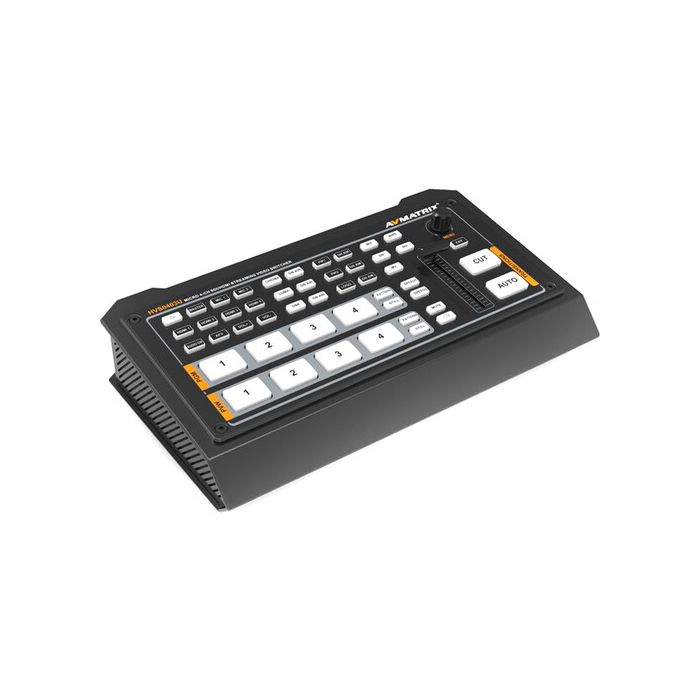 Add professional video switching and audio mixing flexibility to your concert productions, house of worship, educational forum, or live sports programming with this HVS0403U Micro 4-Channel SDI & HDMI Video Switcher from AVMATRIX. Boasting two HDMI and two SDI autodetected inputs, the HVS0403U is a compact and user-friendly video switcher loaded with powerful features, including luma and chroma keying, mix/fade/wipe effects, audio mixing, and a picture-in-picture (PiP) or picture-on-picture (PoP) layout, using tactile functions such as auto and cut transitions or with the T-bar.

Bring in four separate sources for switching up to 1080p60 video with embedded audio, or mix in additional audio originating from two analog stereo 3.5mm mic/line inputs. An HDMI output with multiview support provides ideal previewing functions, and two HDMI program outputs with scaling features give you flexibility for sending simultaneous signals to a display for live events and a recording terminal for editorial consideration. There is also a USB Type-C video output to connect to a computer for video capture and livestreaming, while a LAN port enables you to control the switcher using software via IP.

Logo overlays are supported from a variety of different image file formats, including PNG, JPG, and BMP, and you have the option of capturing up to 16 screenshots and storing up to 16 images using the USB Type-A input with 39 default patterns and two color generators. A tally interface supports GPIO, still frame, mute, and fade-to-black (FTB) functionality.

The switcher supports multiview formats, including 1080p, 1080i, 720p, 576i, and 480p HDMI and SDI signals. Each output supports up/down scaling and can be configured as HDMI/SDI source, PVW, PGM, clean PGM, and multiview.

The switcher supports chroma and luma key for keying off blue/green and black background colors for virtual studio or live event applications.

There are wipe (11 x 2 patterns), mix, and dip transition effects available using the T-bar or Auto button function, and users can also transition to different shots by switching via the Cut button.

A free software can be downloaded from the manufacturer's website allowing users to control all settings of the device via IP.