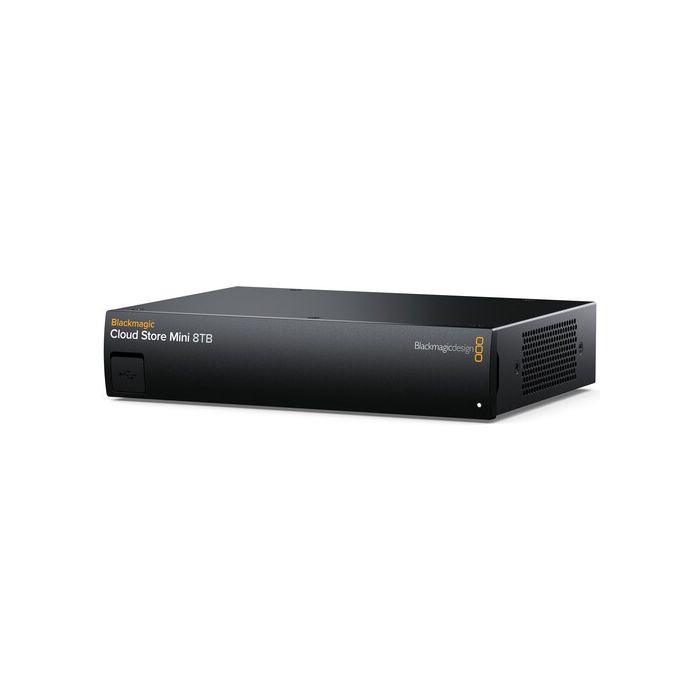 Designed for film and television productions, where large media files need to be shared between multiple users, the 8TB Cloud Store Mini from Blackmagic Design is well suited for editing, color correction, audio, post, and VFX work. It has a capacity of 8TB, which is made up of 4 x 2TB NVMe M.2 SSDs, which are preconfigured as RAID 0 and able to handle 12K Blackmagic raw digital cinema files. The Cloud Store Mini is also equipped with a 10GbE port and 1GbE port for network access, as well as a USB Type-C port that features a built-in network adapter for systems that don't have an RJ45 port. There is also a 5 Gb/s USB Type-C port for standard data transfers, plus an HDMI output that lets you keep track of your Cloud Store Mini's status, including a storage map, speed graphics, sync, active users, and power status.

Designed for Film and Television

The Blackmagic Cloud Store Mini is the perfect network storage solution for any use! It's great for film and television where large media files need to be shared between multiple users for editing, color correction, audio, post, and VFX work. It even handles massive 12K Blackmagic raw digital cinema files. Each user gets zero latency and they don't need to store files on their local computer. It's the perfect solution for DaVinci Resolve, while Dropbox sync allows multiple disks to be synchronized in different locations globally. Then, each location gets the fastest editing experience possible, which is critical for multi-cam editing where multiple media files are playing simultaneously.

The Blackmagic Cloud Store Mini features a compact rack mount design that's very portable and whisper quiet. Internally it has an array of 4 flash memory cards working in parallel for higher speeds. The 10G Ethernet port and the 1G Ethernet port operate as a 2-port network switch, which is great if you don't have a 10G Ethernet network, as you can connect the 10G port directly into your computer and the 1G port to your existing network. If you need to access files quickly, then the USB Type-C port also operates as a network port - just plug it into your computer. There is also an HDMI monitoring output so you can watch a live graphic view of the storage operating on a TV or monitor.

An IEC power socket is included for connecting AC power. All international AC voltages are supported so you can use it globally. Plus, there is a separate DC power input for redundancy or battery use.

10G Ethernet allows high-speed computers to be connected. It's fast, even when lots of users are connected, all at the same time. It's perfect for connecting to the latest 10G Ethernet switches.

The 1G Ethernet connection is provided for slower connections, such as the Internet or slower computers. It is part of the built-in Ethernet switch and helps keep the faster 10G port free.

The USB Type-C port supports Ethernet for connecting it to your computer to access files. That's possible because there is a USB Type-C to Ethernet adapter built in. This USB Type-C port is also used for settings and updates.

The HDMI monitor output lets you see the status of your Cloud Store Mini in real time. Simply plug in a TV or monitor and you'll be able to see a storage map, speed graphics, active users, and power status.

The Blackmagic Cloud Store Mini is available with 8TB of flash memory, so you have lots of space for your files. That's fantastic for television production, as it's small enough to be portable, but it has enough storage space for lots of video media. M.2 flash memory cards are used for extreme reliability, high access speeds, and zero seek times. Plus, the four M.2 cards are arranged in a parallel RAID 0 group so they can operate much faster than a single card. That ensures enough speed to keep up with the 10G Ethernet connection. Plus, in the future, as new larger M.2 cards are released, the flash memory cards can be replaced with new ones. That helps ensure a very long life.

With a separate high-speed 10G Ethernet connection, the Blackmagic Cloud Store Mini is very fast. The internal memory core has been designed to saturate the 10G Ethernet port to its theoretical maximum speed, even with multiple users connected. Plus, files can be accessed with low latency, so responsiveness is fast. That's possible because of the parallel processing used by the memory core. Even at maximum speed, the Blackmagic Cloud Store Mini is extremely quiet with very little noise from the cooling fan, even when editing large 12K digital raw files. Multi-cam editing is also very smooth, even if it's used with large digital film camera files.

Next you need to set the sync folders. That tells the Blackmagic Cloud Store Mini where to sync its files to the remote Dropbox. You can have multiple sync folders for different jobs.

Now set the sync direction. One direction is good when you have local files you want to share, but not enough room for everyone's files. Both directions means everyone gets the same set of files.

With support for Dropbox sync, you can use multiple Blackmagic Cloud Store Mini units to share files globally. That's important when working with large datasets or massive digital film and video files. These files need to be constantly accessed dozens of times a second, so most internet connections are too slow to handle it. While the internet has too much latency to access large files remotely, you can use it to sync these files. Syncing the files to local storage helps eliminate delays in accessing them. That's because everyone has a local copy of the files on their network. The Blackmagic Cloud Store Mini will constantly sync files, even if your computer is turned off.

Using the HDMI monitoring output, simply connect a TV or computer monitor to get a live status of the Blackmagic Cloud Store Mini. The storage map shows a graphic representation of the memory core and real time read and write access happening for the connected users. There are also graphs that show you the data transfers on the Ethernet connection. The main space indicator shows you the capacity of the two USB Type-C disks and how much is currently being used. You can also add a custom name to the Cloud Store Mini. Also, the status for each Dropbox connection is also shown and it's even possible to see connected users and the power status.

On the top left, you can see the storage capacity indicator. The number on the left is the space used and the number on the right is the total USB Type-C disk capacity connected to the Blackmagic Cloud Store Mini.

The storage map display shows a view of the two USB Type-C disks. The memory is divided into segments with reads in cyan and writes in orange. The display will automatically adapt when disks are connected.

The cloud sync status shows each sync folder and its transfers to and from Dropbox. When new files appear in any sync folder, you can see the transfer status as they sync.

You can see each of the connected users and the data transfers for each. However, this list will move down if you have more cloud sync folders, as the sync folder status is more important.

You also get hardware status on the lower left side of the display. This includes the cell size for the storage map and the status of the USB Type-C ports and each disk that is currently connected.

The lower part of the display has the data transfer speed graph. It shows recent read and write speeds for the 10G Ethernet connection. It's great for diagnosing the Ethernet speed on the port.

One of the big advantages of the Blackmagic Cloud Store Mini is that it's private storage that you fully control. There are no subscriptions to sign up for. There are no monthly license fees. There is no tracking of your usage or data. You don't even need to log into a web page to maintain the storage settings because the Blackmagic Cloud Pod uses free to download software utility that runs on Mac and Windows. That means you can run a private network, totally disconnected from the internet. This is critical for many security standards where computer networks cannot be connected to the external internet. With Blackmagic Cloud Store Mini, you can customize your network storage solution with total freedom.

Free Software for Mac and Windows

When you need to change settings, you can use the Blackmagic Cloud Store utility that's available on Mac and Windows. By default, the Blackmagic Cloud Store Mini is set to DHCP, so you can connect it to your network and start transferring files. In many ways, it plugs in just like a regular hard disk. That means it's so easy to set up, you won't need an IT person to get started. However, if you want to customize your network, then the utility software lets you change the network settings in the Cloud Pod. The utility also lets you add Dropbox sync folders.

Blackmagic Design has a wide range of network storage options, depending on your needs. The Blackmagic Cloud Store is the highest performance model, which features an elegant vertical design that's also portable. It includes four 10G Ethernet connections with an Ethernet switch, RAID 5 data protection, and redundant power supplies. The Blackmagic Cloud Pod allows almost any USB Type-C disk to be shared on your network, meaning you can use the USB Type-C disks you already have. The Blackmagic Cloud Pod is the lowest cost option for network storage. It also features a 10G Ethernet connection so it's extremely fast. All models support Dropbox sync and the HDMI monitoring output.