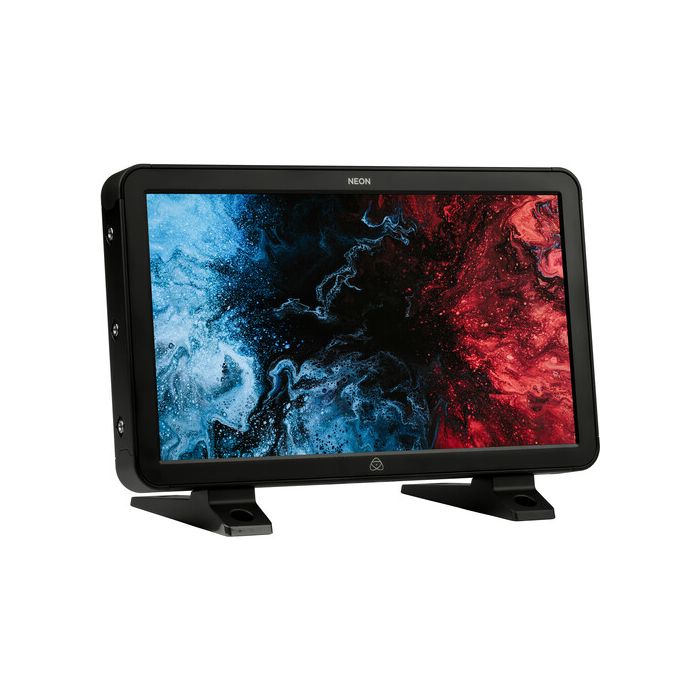 This Atomos NEON 17" 4K HDR Monitor/Recorder is part of the NEON family of monitor/recorders designed as an accurate and consistent monitoring solution with deep blacks and excellent contrast, as well as ProRes and DNx recording capability. This 17" monitor/recorder features a 1920 x 1080 native resolution while supporting DCI and UHD 4K, as well as 1080p/i and 720p. The monitor provides a clear image well capable of supporting HDR and displaying a 10-bit image that covers 100% of the DCI P3 standard. Its 1000 cd/m² brightness and 128 zones of backlight allow the monitor to achieve a contrast ratio of 1,000,000:1.

The NEON features a Master Control Unit that runs the AtomosOS, controlling the monitor. The Master Control Unit is user-replaceable, so you can have the latest Atomos technology without having to replace the entire monitor. Remote control over your NEON is via a downloadable app and your iOS mobile device. Input your video for display via HDMI or SDI (using the included SDI expansion module) and the monitor displays your video. It can also capture ProRes and DNx to a 2.5" SSD (not included) in the Master Caddy II or to a separately available AtomX SSDmini. The monitor features loop-through and cross conversion outputs, and it supports both Rec 709 and Dolby Vision.

The Neon Lineup of Monitor/Recorders

The Neon line is a series of precision on-set and in-studio 4K HDR monitor/recorders that can be synced together to provide a consistent image display and recording system. Multiple NEON monitors, up to 1000, can all be controlled by the Atomos app running on a single iOS mobile device. This allows you to have each camera outputting to its own NEON, and the synced up NEONs will record footage with matching timecode.

NEON uses Bluetooth to connect to your iOS mobile device running the Atomos iOS app that controls the built-in AtomosOS. The app provides controlled playback, slow motion, frame-by-frame analysis, and preview tools. Multiple NEONs sync to each other using sub-gigahertz RF that gives them a range up to 656'.

The cover glass of the NEON can be removed to help minimize any reflections.

The NEON is ready for your HDMI production out of the box, supporting HDMI 2.0b. The included SDI Expansion Module provides you with 12G-SDI in, out, and loop-through, as well as cross conversion between SDI and HDMI and vice versa.

You can record in online quality at 4Kp60 in real time with ProRes Raw, ProRes, and Avid DNx with playout to Dolby Vision.